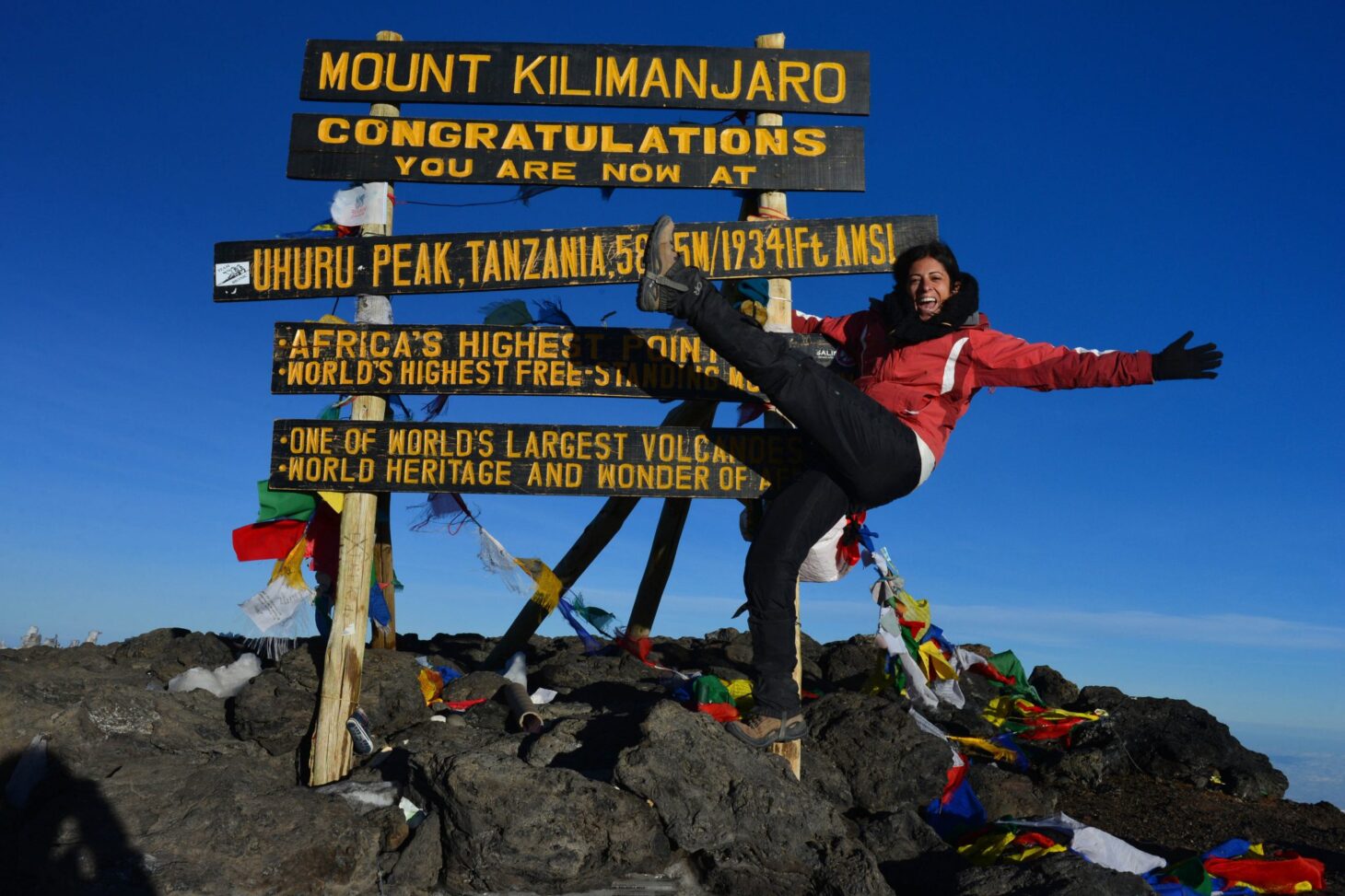 On September 8th, 2018 I conquered Africa’s highest peak and one of the seven summits of the world. At 19341 feet, Kilimanjaro is the tallest free-standing mountain on earth and is as near as you can get to the stars without proper mountaineering skills. I picked one of the best companies (judged by success rate and porter welfare) and set out to ascend via the Lemosho route, which allows plenty of time for acclimatization and is considered to be the most scenic route up the mountain. I traveled alone and met 14 wonderful people from all over the US whose passions had drawn them to the same peak.

We had 53 seeming superhumans taking care of us: 7 guides and 46 porters (all members of the Chagga tribe – the third biggest ethnic group in Tanzania traditionally living on the foothills of Kilimanjaro). Our guides set a slow and steady hiking pace, conducted health checks twice daily, and made sure we were eating well and drinking between 3 and 4 liters per day. The porters carried our duffel bags, filled up our water, balanced tents, sleeping bags, portable toilets, and food on their heads/necks, and walked three times faster than we did to pitch camp and cook before our arrival (you will never complain about pack weight again after seeing the loads hoisted by Kili porters). Hot drinks and generous meals were waiting for us at each campsite, as well as Augustino who, with his infectious smile, dusted off our pants and ensured our footwear remained in good shape. We lived on the mountain completely unplugged for 8 days and hiked a total of 43 miles crossing several climate zones from the humid tropical rainforest to the harsh and cold arctic zone on the upper slopes of Kibo. We spent at least 10 hours in our tents everyday after hiking between 4 and 6 hours. The sunsets brought with them changing, floating, swirling clouds and were unfailingly hypnotic. The night sky was always clear with glistening stars and the gorgeous Milky Way though the below-freezing temperatures made it hard to be outside once the sun disappeared (Those amazing nighttime views were one of the unexpected benefits of a course of Diamox.)

We started our journey at 7742’ in a lush and dense jungle known for its moss-covered trees and elusive blue monkeys. The following day, we trekked our way through the moorland and traversed the Shira Plateau where we had out first glimpse of the snow-capped peak enveloped in clouds. From day 2 onward, we could see our destination – the majestic mountain waiting to be explored in all of its glory. On day 3 (with an elevation rise from 11500’ to 13580’), I had an upset stomach and was vomiting during most of the hike. I felt awful and just wanted to lay down. When we arrived to Moir Hut, I took some meds, napped and felt better when I woke up. On day 4, I had no appetite and my heart was racing. I had a resting pulse of 112 bpm and my oxygen saturation level was 87%. One person in our group developed high-altitude pulmonary edema that morning and had to be taken off the mountain and hospitalized. We hiked high (15190’) and slept low (13044’). As we descended from Lava Tower to Barranco Camp, we walked through the afternoon mist and a grove of alien looking plants – giant groundsels that are only found on Mt Kilimanjaro. The landscape was surreal. On day 5, my body finally adapted and I had fun climbing the rocky Barranco wall. It was my favorite part of the trek. It started sleeting as soon as we arrived to camp. I wore almost every piece of clothing I had packed that night but could not stay warm or sleep. On day 6, we had breakfast in Karanga Camp (13106’) in the arid alpine desert. At this altitude, nothing lives and it is as barren as can be. Our tents were covered with ice. When we made it to Barafu Base Camp at 15331’, I had a headache and a cold and was up until 11:30pm when we started our final ascent.

I thought I knew what to expect on Summit night. I had seen videos of people describing their experience and had been training for endurance for the past 6 months (I had also hiked Mt Whitney and could walk up to 16 miles in one day) but nothing could have prepared me for it. The 3-mile 4000-ft climb to Uhuru Peak took us 7.5 hours. The steep stretch from Base Camp to Stella Point (18885’) was the most extreme, strenuous, exhausting, grueling, brutal, demoralizing thing I have ever experienced. Every single step was an effort. I could only see right in front of me as well as the little procession of headlamps in the distance. I was struggling to get enough oxygen and keep my balance on the scree-filled slope with a 30 mph wind beating my body. There was no way out: I would freeze if I stopped and it would even be harder to walk down to Base Camp on loose gravel. I just had to keep moving forward “pole pole” one step at a time. I saw a few climbers in distress from the effects of thin air along the way. Another person in our group succumbed to acute mountain sickness and could not keep going. Thankfully, one of the guides, Evance, was constantly checking on me. He carried my heavy camera, opened my backpack pockets to feed me chocolate, wiped my runny nose, and gave me water from my bottle as the tube of my hydration bladder had frozen. I could not use my hands in any way, not even to hold my trekking poles (which I only used on the way down). My fingertips were numb despite having hand warmers stuffed inside my ski gloves. My toes were frozen although I had 2 thick socks on. I was wearing 2 long sleeve shirts, 2 fleece jackets, 1 synthetic jacket, 1 waterproof jacket, 2 knit hats and neck warmer, and waterproof pants on top of my leggings and fleece pants. But somehow, after hours of high exertion in total darkness, 5°F and high winds, we finally reached the crest of the Kibo crater rim at dawn. I was nauseous, out of breath, and crying with joy and overwhelm.

The traverse around the rim to Uhuru Peak was peaceful and uplifting. Watching the light gradually fill in the icy moonscape as we walked a narrow path surrounded by penitentes (fascinating snow formations found at high altitudes) up to our waists was unbelievable. The roof of Africa looked otherworldly with the equatorial ice on the black sand. I pushed my body and mind so hard to be able to experience these moments. I was ecstatic. The sights were spectacular. I managed to photograph the sunrise coloring the sky behind the jagged outline of Mawenzi (the second highest volcanic cone on Kilimanjaro), the Southern Icefield with Mount Meru in the distance, and the gnarled ice spires whimsically shaped by the sun and dry air.

How beautiful is our planet and how lucky I am to be alive! Was all I could think.

Then, I saw the Furtwängler Glacier (a small remnant of a giant ice cap that once crowned Kilimanjaro and is projected to disappear within 20 years) illuminated in the morning sun. It was the only yellow structure in a white-blue sea of ice and was begging to be captured in a photo…but I had to bury my frozen hands in my gloves.

After taking some group pictures at the peak, we descended quickly because at this altitude, acclimatization is not possible. The descent through deep sand and loose rocks was hard and slippery but the sun and a massive sense of exhilaration and accomplishment had flooded me with warmth and energy. After having lunch at Base Camp, we continued down until we reached Mweka Camp at 10065’. It was 6pm and we had been trekking since the night before. My knees were screaming and my lips/nose were completely cracked. On the final morning, following a celebratory performance of the Kilimanjaro Song by our porters, we set a quick pace down the muddy trail (the only time I needed my crampons) to 5380’. I exited the national park both humbled and empowered. There were tears in my eyes, Swahili verses ringing in my ears, and beautiful memories dancing wildly in my mind. My summit success would not have been possible without the fantastic service and support from the strong Chagga tribesmen and my fellow trekkers who had progressively become one family looking out for each other since our first steps up Kilimanjaro. I will carry this experience with me for the rest of my life.